I really went outside my comfort zone trying this new palette from Urban Decay but sometimes you just want a little oomph in your makeup routine. This lovely palette add a bit of sparkle to my makeup world.

$70.00 CAD. I personally think this is pretty expensive for eight shadows that are only 0.02 oz each. With the amount of times I’d probably use this palette, I could have just purchased one or two single glitters. 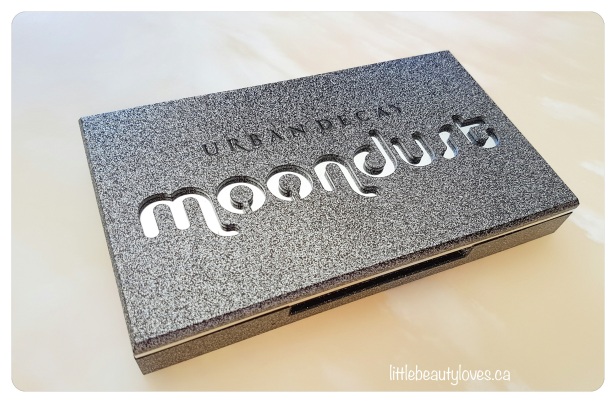 Urban Decay really knows how to package shadows and this one is no exception. The outside is silver glitter with a slight rough texture and “Moondust” is cut-out lettering exposing a mirror backdrop. The palette has a strong magnetic closure and houses a large mirror. The palette is only about 4″x 6″ which makes it great for travelling or storing. The pans of glitter pop against the matte black inside. 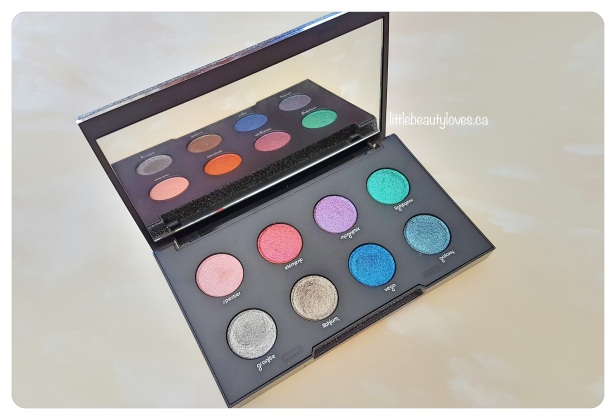 The shadows are really soft and super pigmented. Except for the lightest shade, specter, I only needed to do one finger swipe on my hand to produce clear swatches. I was expecting this to feel gritty and maybe scratchy but it’s nothing like that at all. They apply as easily as you’d expect an Urban Decay shadow to. 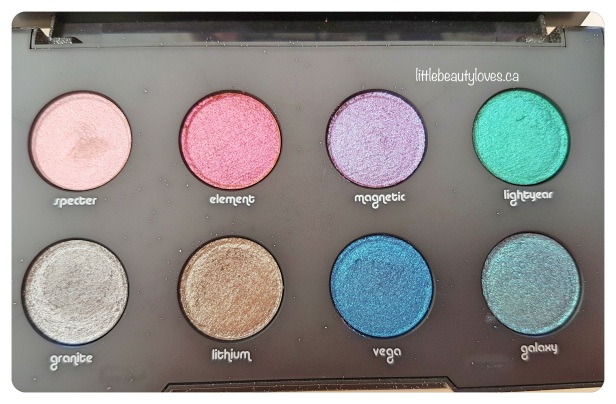 I had a lot of fall-out when applying these eyeshadows. I assumed this would happen so I did apply the shadows before the rest of my makeup. I did have to use a makeup wipe to remove the fall-out though.

For my look first I used my Naked2 Basics palette to build a base on my eyes then I added some Too Faced Shadow Insurance on top and covered my whole lid with lithium. After, I mixed vega and galaxy and placed that on the center of my lid and finished it off with specter mixed with element on my lower lash line.

I love the way these looked on. The look I created is fun but wearable in my opinion. I wore this for about 10 hours and found that it wore off the most on the edges of my eyelid, probably because that’s where I had the least primer, but for the most part it still looked good. The colours did start blending together which I wasn’t too happy with but I think maybe a glitter glue would have helped keep them separated. One thing I was most impressed with is how little fallout I had throughout the day! I was expecting glitter to be everywhere but it actually wasn’t. Of course my primer did help.

With holidays around the corner, I’m going to try to incorporate more glitter shades and use this palette more because I do like the way it looks on but for the price I think it’s just not worth it because it’s not a palette I would personally use everyday. However,  if you’re a fan of Urban Decay and love collecting their Palette’s I would totally say to get this because the formula of the shadows is fantastic.

What do you think of this palette? Would you get it?

14 thoughts on “Over the Moon for Moodust by Urban Decay: Palette Collection Review Series”

Get to know me!

Hello there! I'm Dal and I love skincare, makeup, fashion, living healthy and having fun. I'm always up for something new when it comes to makeup and I want to share that with you in my blog.